Needle exchange programs in the US - watch our movie to learn how harm reduction protects communities from death and disease!

After two decades, the US Congress has voted to lift a ban on federal funding of needle exchange programs in December. This historic decision signals a new area for harm reduction in the United States – our new movie shows why and how needle exchange programs protect communities from the unintended harms caused by drug use and drug policies. The New York-based Harm Reduction Coalition (HRC) is a longtime ally of the Hungarian Civil Liberties Union: we always admired the courage and creativity of these folks to speak up for harm reduction in a country that declared a war on drug users. This movie is a result of our cooperation. Most of the interviews were filmed in Albuquerque, at the International Drug Policy Reform Conference, while the footage from the NYC Lower East Side Harm Reduction Center were filmed by Matt Curtis, a tireless harm reduction advocate.

There are already more than 200 syringe exchange programs all around the US that provided 30 million sterile needles and syringes for drug users last year. These programs are vital in the fight against AIDS and overdoses. According to the Centers for Disease Control and Prevention, 2,397 US citizens died of AIDS in 2007 were reportedly infected through the sharing of injecting equipment. All these deaths could be prevented by a very simple and cheap measure: exchanging used needles to sterile ones. A syringe costs less than a dollar – but it costs hundreds of thousands of dollars for tax payers to treat a person living with HIV. And these programs are not only about syringes: in many cases they are the first contact between injecting drug users and the public health care system. They train clients to avoid overdoses, they form self-help groups for people living with HIV or Hepatitis C, and they provide shelter for the homeless. Many of the clients live on the margins of society, these programs help them to get a job, to get a house or to get into treatment. Sometimes it takes long years for a drug user to reintegrate to society and if they do not get support and care during these years of active drug use they have less of a chance to survive. A dead man is abstinent of course – but is abstinence more important than saving lives?

However, the public perception of these programs is still controversial: drug warriors and fear mongers use all opportunities to attack the very principles of harm reduction – that is, to reduce negative social and health consequences of drug use without requiring total abstinence from drug users. A lot of people think that providing drug users with sterile injecting equipment or information about safer use empowers them to use more drugs and possibly even introduce young kids to drug use. These fears led to the introduction of a ban on federal funding in 1988. However, scientific research has not confirmed these fears. According to a UN World Health Organization report based on the meta-analysis of more than 200 studies, needle exchange programs do not increase drug use but they effectively reduce HIV infections among people who have been already injecting. Between 1991 and 1997, the U.S. Government funded seven reports on clean needle programs for persons who inject drugs. The reports are unanimous in their conclusions that clean needle programs reduce HIV transmission, and none find that clean needle programs cause rates of drug use to increase. 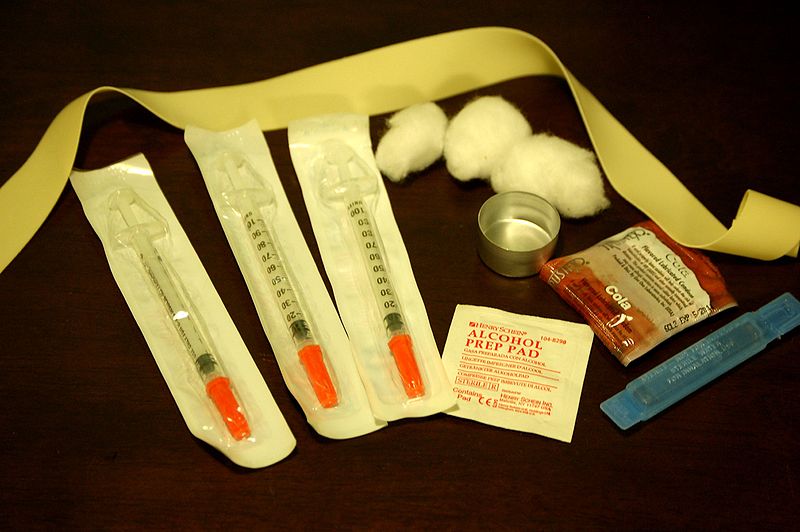 A Needle Exchange kit: the items are, from the top clockwise: a tourniquet, cotton balls, a pot for cooking drugs, a condom, sterile water, alcohol swabs, and (from l-r) a thin needle, a thinner needle, and the thinnest needle (Source: Wikipedia)

From the perspective of the “war on drugs” ideology, all harm reduction is suspicious because it seems to undermine the “just say no” message. And indeed, if you would like to understand what harm reduction is really about, first you have to realize the stupidity of the “war on drugs” itself. There has always been people who used drugs, their numbers cannot be reduced by waging a war against them. Of course you can arrest and imprison a lot of people, you can threaten schoolchildren with dramatic TV ads about the dangers of drug use and you can deny people from accessing sterile needles and syringes but the only result you get is more crime, more violence, more infections and more deaths.

The government plans to introduce harsher penalties against drug offenders in Bulgaria - watch our movie and sign the petition!