Presented by Máté Dániel Szabó (Director of Programs, HCLU) at the international conference "No country for civil society – What strategies can human rights organizations follow under increasingly authoritarian regimes?" on 30 May, 2014, Budapest 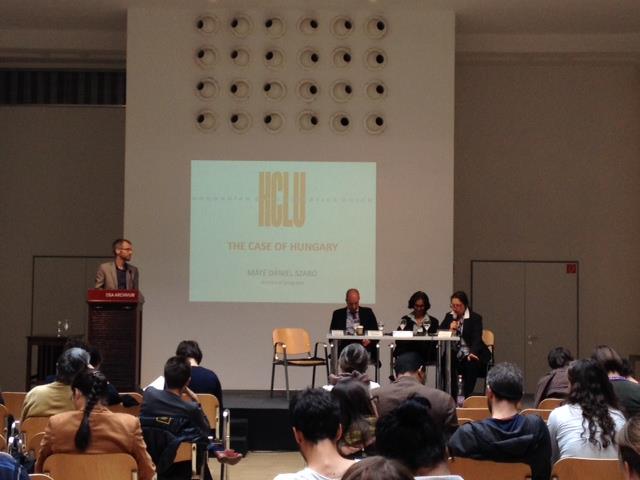 Welcome to Hungary, a country that struggled out of tyranny twenty five years ago thanks to the fortunate circumstances of the international situation. It happened in 1989. At that time, we reorganized our constitution according to new principles, and in order to set it into action we regularly held free elections and established independent institutions. The country’s constitution ensured the citizens fundamental rights. And these fundamental rights were supported by effective guarantees. An active Constitutional Court enforced the constitution, with a wide jurisdiction, which regularly cut off of abuses of legislative power when it was needed. Political publicity was not working perfectly, but it was working sufficiently, and therefore was suitable for controlling the exercise of public power.

Four years ago the free elections resulted in a supermajority of the ruling party in the Parliament. As a consequence of this extraordinary electoral result, the new government felt itself  qualified to alter the foundations of the state and the political system. At first, it set its sights on political discourse. With a Media Authority vested with an unchecked power and a new Media Law with nebulous rules regarding the press it was able to almost completely suppress critical journalism in the country. The Parliament adopted some unconstitutional laws, and when the Constitutional Court annulled one of them, the government rapidly restricted the authority of the Court. In an extraordinarily rapid procedure it replaced the constitution with a new Fundamental Law. The new constitutional framework imposed restraints on the fundamental freedom of citizens rather than on public power. It defines the legal framework in which the citizen’s life is supposed to fit. The Fundamental Law restricts individual freedom beyond the extent that is strictly necessary. Instead of limiting its intervention into citizens’ lives and the various relationships among them, the Hungarian state now uses law as leverage to claim the right to define the spheres of privacy and private relationships among individuals. The Fundamental Law transgresses the principle that fundamental rights accrue to people and citizens innately, by virtue of their being people and citizens. Furthermore, the Government gained control over  independent institutions, and removed the system of checks and balances. The structure of the new constitutional institutions fails to meet the principle of division of powers. This power grab did not end with the enactment of the new Fundamental Law: each and every time the government faced a constitutional ban, the Fundamental Law was amended. In Hungary, the Fundamental Law no longer tells us what the government is prohibited to do. Instead, it tells us what the government can do in spite of any constitutional criteria. In other words, the government has succeeded in turning the constitution from a means of restricting executive and legislative power into a tool of its own autocratic ambitions.

How do we summarize the constitutional situation in Hungary in 2014? In my view, at the moment Hungary has a Fundamental Law, but has no constitution,by which I mean a constitution that is compatible with the idea of modern constitutionalism.

Let's see what all these changes meant to a human rights NGO’s life and how it is supposed to react to these changes.

I am talking about a specific human rights NGO, namely the  Hungarian Civil Liberties Union, that was established in a democratic country in order to strengthen  democracy through the protection of various fundamental rights.

The fundamental rights system enabled HCLU to organize itself and to function, and did not question the grounds of its existence: namely the fundamental freedoms recognized by the state. HCLU has been using its own freedom  to help others realize theirs.

2. Secondly, under the circumstances of constitutional democracy the function of our human rights NGO could be described with the role of a public watchdog: It has been acting as part of the correction mechanisms between the state and the citizen.

It has called attention to human rights issues, initiated legal procedures, and performed advocacy work as well as fought for adequate corrective measures.

4. And finally, for its professional activities the human rights NGO has been using the institutions and mechanisms of the constitutional state: initiated legal proceedings before courts, ombudsmen, the Constitutional Court and other institutions, and conducted negotiations with lawmakers and other decision-makers.

The weakening of the constitution I described before resulted in changesd for the human rights NGO  regarding the following four aspects.

1. Firstly, when the new system questions fundamental rights, it does not merely produce new tasks for us to deal with in our professional work, but also attacks the grounds, the necessary preconditions of the organization’s existence and operation.

How does this dual effect manifest in Hungary? The government tries to control non-govermental organisations to a greater extent than would be justifiable. For example it tries to gain the power to make decisions about how the financial funds of NGOs that are independent from the state are distributed.

Another example is the underhanded way in which the Hungarian state restricts  freedom: there are some unjustifiable restrictive rules on freedom (especially freedom of speech) that were never applied. Not a single journalist or member of civil rights groups was punished for breaking these laws. But these laws succeed in their objective: the journalists and the NGO’s criticizing the government seemingly voluntarily regulate themselves, and refrain from fulfilling their tasks. The chilling effect works effectively, as the watchdog itself puts on its muzzle.

2. Secondly, in the framework of post-constitutional Hungary the human rights NGO does not act as a traditional watchdog that serves as en element of the correctional mechanisms of the democracy. Rather, it becomes the opposition to the regime. Instead of individual abuses of power, the regime itself is the focal point of its operation, as it challenges the political system not guaranteeing fundamental freedoms. Its aim is the denial of the current regime and the restoration of constitutionalism.

I will tell you something that shows our approach to the Fundamental Law of Hungary: we always try to avoid referring to it as our constitution, and we use the title of the document, but we do not recognize it as an instrument of social integration and an expression of community norms and values regarding the relations between the individuals and the state.

4. And finally, we reduce our use of the institutions offered by the state, such as the redress mechanisms for human rights breaches – for several reasons: because we are already disappointed in their usefulness, or because we found that they are not fulfilling their tasks, they are not independent or they are not operating properly, and because we don’t wish to legitimize the regime we are opposing by using its instruments.

A good example of this is how we treat the newly established Data Protection and Freedom of Information Authority. Its predecessor, the data protection ombudsman used to be an important and effective partner to cooperate with, but the new authority was set up with an infringement on the independence of the data protection ombudsman (whose term in office was brought to a premature end). We experienced that the authority does not work independently from the government and prevents discussion of informational rights. Therefore we rarely turn to this authority, but do take notice of its existence.

It doesn’t mean that we never initiate individual cases before domestic courts and other institutions. But our strategic litigation cases are aimed not at the improvement of law through domestic fora, but through international institutions. Individual cases initiated before domestic courts are increasingly for the sole purpose of exhausting domestic remedies, in order to comply with the formal conditions of bringing a case before an international forum, especially the Strasbourg court.

As a result: today there are no traditional checks and balances within the state, there are no functioning independent bodies, there is no a worthwhile political opposition: therefore a human rights NGO instead of fulfilling the original function it was established to, takes over the function of being the opposition, and tries to counterbalance the government’s practically limitless power. Among the tools used by the human rights NGO some become more important than they were before: the tools aiming to  raise the of awareness of the public, and the international fora, because with them the human rights NGO can communicate on the basis of the same standards of human rights (the standards are the values of a democratic society, not the norms of the Fundamental Law), and last but not least they remain independent from the Hungarian Government.

This activity, in the rhetoric of the Hungarian government is treason against the nation, a crime of being disloyal to the country.

I am closing by bringing up a paradox: If a human rights NGO in the framework of a non-constitutional system uses the institutions and redress mechanisms offered by the state for its professional purposes, then it uses the very mechanisms of a system that  denies its existence. The mechanisms of this system must  be exhausted and then exceeded in order to have any form of redress. Therefore a human rights NGO shall select its means carefully. Only independent institutions may be used fairly, in this case mainly the courts and exceptionally the Constitutional Court in Hungary. But legislation shall not be legitimized by participation on the mock-debates that are currently happening in our county.

The Truth About the Tavares Report

The Hungarian government provided detailed comments on the so-called Tavares Report regarding the situation of fundamental rights in Hungary, which will soon be discussed by Members of the European Parliament. The Hungarian Civil Liberties Union (HCLU) the Hungarian Helsinki Committee (HHC) and the Standards (Mérték) Media Monitor responded to the government’s inaccurate and unfounded comments in an analysis submitted to the factions of the European Parliament.

What is Wrong with the Fourth Amendment to the Fundamental Law?