The Wire has been described by many critics as the greatest television series ever made and it has been praised for its realistic portrayal of urban life - especially the war on drugs. We at the HCLU video advocacy team are definiteley great fans of the show and one of our favourite characters was Detective Kima Greggs. We were delighted to find out that Sonja Sohn - the actress who played Kima - is attending the 8th National Harm Reduction Conference in Austin, Texas organized by the Harm Reduction Coalition, where she was so kind to give an interview to us. 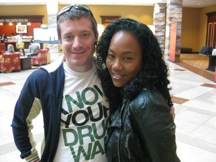 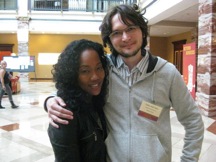 We learnt that she founded the ReWIRED for Change - an outreach program intended to communicate with (and ultimately rehabilitate) at-risk youth involved in criminal activity. This program has been using the TV show as a teaching tool to examine and query their lives and past actions. In addition to being a great actress she is wonderful person who transforms her environment with her kindness and love.

Please watch and share the latest of our Count the Costs campaign movie serials!

To The Next Level: Marijuana Regulation in the US

Welcome to the future of US marijuana regulation - please watch and share HCLU's new movie!

Get a penalty for doing your job!

Budai Gyula is a public employee in Ózd (town in Hungary). His job is to keep the recycling bins in order. He received a penalty for 10.000 HUF for scavenging, while he was doing his job. He acted correctly by not acknowledging his supposed offence by his signature. If he had done so, he could not argue against the decision. Do not sign anything if you have not committed what you’re being charged for!
Read more »