Peter Juhasz, activist of the Hemp Seed Association (Kendermag Egyesület) came on for a trial on Monday in a landmark case. 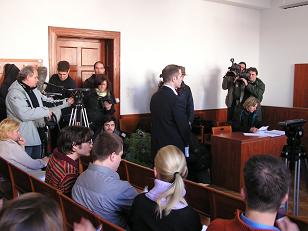 Mr. Juhasz turned himself in as one of the participants of the so called „Civil Obedience Movement” (read our article) in the end of March, 2005. In the course of this campaign more than 60 activists reported their past drug use to the police in order to raise public awareness on the harmful consequences of drug prohibition. The Hungarian Civil Liberties Union (HCLU), a Budapest based organization advocating the human rights of vulnerable populations, provided legal assistence and representation for all activists involved in the movement. The attitude of the police investigators was criticized by the defenders because the police rejected to arrest some of the self-reported activists (for example Júlia Lángh, a famous novelist, 64 years old grandmother) while they arrested and prosecuted the rest of them (who resembled to the sterotype of drug user), even if the confessions of the two groups contained the same elements.

In his confession Mr. Juhasz declared that he grew and used marijuana solely to supply his own personal needs. This is a very important argument because according to the Hungarian law system an act can be prosecuted as a crime only if the Penal Code contains it and in those cases when the act poses a concrete danger to society. He carried a half grown cannabis plant to the court as an evidence supporting his statement. The event got big media attention, the courtroom was full with reporters and cameramen who were pleased to take as many photos as they wish about a psychotropic plant at a criminal court. Andrea Pelle, the HCLU lawyer defending Mr. Juhasz suggeste the court to suspend the criminal procedure and ask the Constitutional Court to investigate the case and decide if the related paragraphs of the Penal Code have to be amended to avoid the criminalization of marijuana users who do not pose any threat to our society. Ms. Pelle also delivered a petition signed by more than 50 social and health care professionals working in the field of drug abuse prevention and treatment. The petition supported the campaign of drug users and called the government for the decriminalization of drug use.

However, the judge refered to a previous decision made by the Constitutional Court in December 2004 (read our article), according to which the use of illicit substances cannot be considered as a single act taken out of social context, suggesting that drug use as a social phenomenon always threats society. This Constitutional Court resolution – criticised by several professionals and activists in the past - also stated that people have no right „to be high”, and the state can decide if it considers a substance more dangerous than others. Thererfore the court sentenced Mr. Juhasz to 350 USD fine and an additional amount of 355 USD to refund criminal expenses. The defendant pointed out that he is „1000 percent sure” he has never done any harm to anybody with his cannabis use except himself, so he is appealing against this verdict and looking forward to petition the European Court of Human Rights if that will be necessary. After the trial he said to journalists that he finds it especially controversial that the court proclaimed that his act was dangerous but they did not even seize his plant, which he could safely take out of the building and return to his home.

Second Needle and Syringe Program Shut Down in Budapest

Why was the search of the whistleblower’s home unlawful?

In November, 2013 András Horváth, former staff member of the Hungarian National Tax and Customs Administration turned to the public with his information on companies committing VAT fraud with the assistance of the National Tax and Customs Administration (NAV). The whistleblower decided to seek publicity after several unsuccessful attempts to raise the issue within the Administration and the government. The revelations resulted in huge media coverage and created an unresolved political scandal ever since.